The 10th symphony of Beethoven

The way a solo artist is finally convinced, in case he had any doubts, that he is, precisely that, a guy who remains alone just doing what he is doing: approaching Beethoven’s Ninth Symphony. Maybe he has a choir of about 80 people that are around 15 meters away drawing up a straight line from a neck that is better not to scratch. Around him, a symphony orchestra that comes marching by from three movements ago with a whole artillery of musicians riding on their instruments and gliding through the air between a muddle of arches, arms and metals against a director who has no choice but to have brought from home his vital pulse.

Moreover, there is a moment when, both the musicians and the public, jointly interpret the same part of the score written by Beethoven, and that quite agree with all three silences that concern all of the sound before the baritone starts singing without more accompaniment than their glances. Such a silence, that is only reached after so much music happens, is similar to the crest of the wave before resolving in a water tube. There is a moment of weightlessness and free fall where baritones climb ahead to sweep away lots of years in which symphonies were silent regarding to singing. What is then heard, said in a German language which, since then, has met every accent is “Oh friends…” that is the beginning of what will be the end to which we arrive wanting to postpone it.

I have never met anyone that after this work does not have the need to share a few beers, a walk or a hug. Perhaps we cannot see this as, sometimes, people dismiss at the ending of the concert politely and march the path that leads them to their lives, leaving behind the gift that we all have made to ourselves. But if wishes and desires took a break, we would find all cafes overflowing with the joy that a guy, apparently shy and unsuccessful in life, left us spread in his last symphony in such a way that always feels like brand new. There is something enigmatic in knowing that the music that reintegrates us in what is human and gives us back part of what we are, is always heard as a premiere.

After Beethoven, I often think about Beethoven, and I miss him and I have the idea that it would be nice to send him an email to thank him about all of that, we really do not know how to name, but it is what is left after giving life to his works and that we then drag to breakfast, in the same way as closing a book or taking a call.

Beethoven travelled to Lisbon after the failure of his Symphony No. 10 and it was there where, not only he burnt his originals, but was also the place where he found the mysterious pleasure of sitting on a terrace in front of a warm sea filled with promises. In addition, it was this place that relieved his absent and injured ears.

Lisbon revealed Beethoven that his harshness could be a source of fascination. As the south is a place where the noise of life does not bother those who live it, the shouts and blows that uttered his piano were part of the everyday voice that tossed to the streets of the city on the passing of days.

The haze and the desire to have a nap, that is the way of living there, ended up changing the corners of his character and making happiness a part of his rooms. Apart from that, everything else was full of walks, submissive afternoons, soups brought out of time and nights sitting on a bench to talk until any calm day ends up shutting down without moving any of its seconds.

If things that usually happen in the universe remained in my hands for a moment, or if they rent to me for a while the course of things, this would be the way I would give back Beethoven the tone of his last days, a Mediterranean way to thank him for such well placed notes on a way that we are still going through. 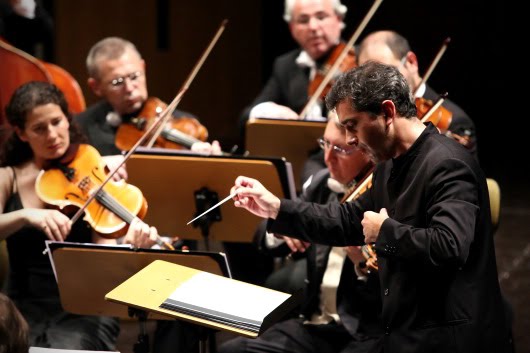 Symphony No. 9 by Beethoven. Lisboa